Landing gear: How to solve the deformation of thin-walled workpieces?

Self-centering component structure: The taper shank is installed into the lathe headstock through the No. 5 Morse cone, and the self-locking function of Morse taper is used to realize the positioning of the clamp on the machine tool; the nut 2 is used for the lock nut 3 to ensure The position of the workpiece; the left and right rotation of the nut 3 is suitable for the adjustment processing of workpieces of different lengths; the taper block 4 is used for the end face positioning of the workpiece; since the aspect ratio of the workpiece is large, the two ends of the collet chuck are designed as the staggered spring petals Conducive to uniform expansion, the workpiece reference hole is automatically centered and clamped, the structure is shown in Figure 2; the spring forces the cone 7 to move to the right to loosen the workpiece when the nut 8 is loosened.

The top component structure: the top head is used for the top tightening of the workpiece; the nut 10 can adjust the clearance of the tapered bearing and the thrust ball bearing to ensure the high rotation precision of the tip and the machine tool spindle, and bear the axial load; the tail vertebra passes the No. 4 Morse cone The body is connected with the Morse taper hole of the machine tailstock, and the structure is shown in Fig. 3; the top shaft and the tip end are connected by a 1:20 taper and rotate in the tail vertebra; the needle bearing ensures high-precision rotation of the tip shaft and the diameter The load; the screw plug adjusts the clearance of the needle bearing; the seals 17, 19 are used for sealing; the screw is used to seal the oil hole. 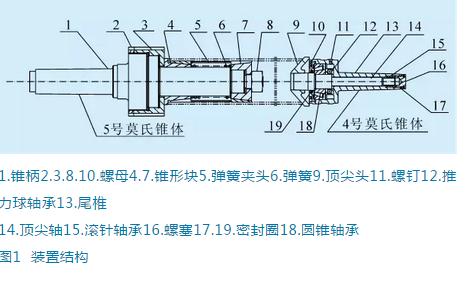 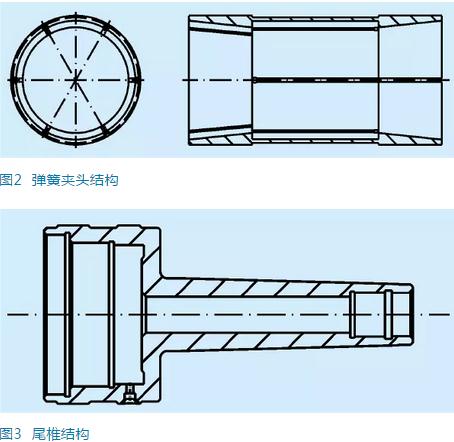 According to the rotational symmetry function of the taper, when the large-diameter ratio thin-walled workpiece is turned, the taper shank of the self-centering part is installed into the spindle hole of the lathe by the No. 5 Morse cone; the nut 3 is locked and positioned by the nut 2 after being installed in position. ; against the workpiece end faces is a tapered shoulder blocks, the nut 8 is rotated, the outer tapered surface tapered blocks 4 and 7 of the tapered block valve spring forcing collet outwardly open up a uniform, the workpiece is automatically given a uniform Heart lock; top tip, nut 10, screw, thrust ball bearing, caudal vertebra, tip shaft, needle bearing, screw plug, seals 17 and 19, and the tip portion of the tapered bearing, using the No. 4 Mohs cone and machine tailstock Morse taper bore self-centering lock, the other end of the first outer tapered bore leading top tight workpiece, the self-centering unit and the rotational center of the top assembly in a lathe spindle; turning work is complete, release The top assembly, the counter-rotating nut 8 and the spring strap retracting the tapered block 7, the spring collet is released to remove the workpiece. When the machine tool has low precision or poor rigidity, the cutting speed is appropriately reduced to ensure the quality of the workpiece.

The main working part of the self-centering device for clamping large-diameter ratio thin-walled workpieces is taper fit, which fully exerts the cone-shaped rotational symmetry function. The uniform deformation of the slotted spring-spring collet makes the mechanism have higher centering accuracy. The combination design of the roller bearing, the thrust bearing and the needle bearing of the top assembly ensures that the workpiece to be machined is at the center of rotation of the lathe main shaft, and solves the deformation problem of the large-length-diameter thin-walled workpiece.